Get a site
You are here: Home / 2015 / June / Safest cities, 3 of top 10 in South East Asia is from the Philippines base on numbeo ranking

In the latest crime index rate by numbeo. Three cities from the Philippines topped the safest city in south east asia.

Numbeo was a user generated measurement from  contributors and all are free to contribute on their site. Numbeo summarized the data and generate a score base on the data given by the contributors on a automatic calculatio. And is updated each time a contribution is made. Establish by a former google engineering. Numbeo was mentioned or used as a source in hundreds of major newspapers around the world, including Forbes, Business Insider, Time, The Economist, BBC, The New York Times, China Daily, and The Telegraph.

Numbeo ranked the cities base on different criteria. Such as robbery, theft, physical assult, discrimination, etc.
Coincidentally, it seems that the major division of the Philippine Archepelago has a representation for the list.

Davao ranked 2nd safest city in SEA and is situated in Mindanao.

Valenzuela city ranked 3rd was in metro manila in Luzon

and lastly, Cebu who ranked 9th is from the visayas region

a true show that when it come to safety of the people this cities proved that they are taking a serious job to ensure the order of their constituents. 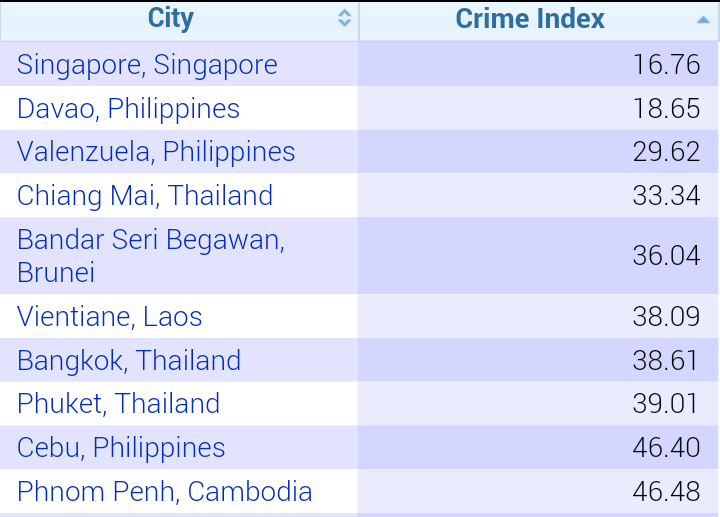 numbeo continously collect data from users/individual on their site.

Rapist get acquitted for crime since it was a finger rape! In 2011, a Malaysian teenage girl aged 1 ...